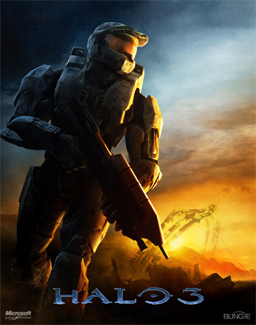 It's possible to use multiple skies in your level by adding a digit to the end of your +sky material. If we wanted three skies in our level for example we would have the following:

It's important that the digit at the end of the material starts at zero. The digit will be used as an index by the cluster to get a sky tag reference from the scenario skies tag block. You'll also have to make sure that a cluster does not use more than one sky or you will get an error on import.

If you were not aware, a cluster is a section of a level divided by a portal. In the case of the provided blend file above there are 7 clusters. If a map has no portals then there is one cluster. Be sure to also prevent multiple skies from being able to be seen by the player at once, or else the player will see a sudden transition between them when moving between clusters. Tool will output a warning if a sky can see another sky.

Avoid using trailing digits on non-sky material names, or you'll get tool warnings about duplicate shaders, and avoid numbers in shader tag names. Use letters instead if you need to make variants.

You may be aware of weather polyhedra from previous games. This was a feature that allowed map designers to prevent weather effects from appearing in a certain section of level. I regret to inform you that this is not a feature in Halo 3. It seems to be have been deprecated during the switch from weather tags to atmosphere parameters.

It is common for singleplayer maps to have multiple BSPs. This helps manage game resources and avoid BSP limits for long missions. To accomplish this, place multiple ASS files in the same structure folder for the level. Each ASS will be compiled into it's own unique BSP tag for your scenario to use. Do not attempt to use multiple BSPs in an MP scenario.

Object symbols are characters that go at the start of the object name.

Portals are plane objects that cut through geometry to divide it into sections called clusters. This is either usually to enhance performance or section off a part of a level in order to set specific environment sounds or effects in that area. Portals are defined by the special material name +portal. Portals can also intersect without needing to be connected unlike CE. This makes it extremely simple to just generate a set of grid portals to quickly test high poly geometry before making better portals. See the Portals Example Blend and Materials Overview for examples.

Instance geometry is geometry that is linked and duplicated to cut down on used memory. It's also a decent way to avoid having to stich in geometry into your BSP. Think of it like scenery objects with lightmaps. The ASS exporter checks if an object is an instance by seeing if it has linked mesh data. They should also have the % symbol at the start of their object names. The only unique property that instance can have is uniform scale. All instances will otherwise look the same. See the Instance Geometry Example Blend for an example on how to use this.

Object data in Blender can be linked with the Ctrl + L hotkeys.

We will be using the end result of the level guide for this example but you can look at the completed files in the file list for the items listed here.

Water in Halo 3 is handled by two different files. The ASS file located in the level's structure sub directory will handle the visual aspects of our water plane while out of water. The ASS file located in the level's structure-design sub directory will handle things related to how our water region interacts with objects in the world. This includes actions such as objects floating on the surface and screen effects while the game camera is inside a water region. Lets go over setting up the visual aspect in the structure ASS file first.

Starting with the visual aspects of our water, we will create a simple plane in our example level to represent the water in our game world. Do not worry about following the sealed world rules for now. We will be naming our new plane object water_plane and give it a Z height of -400 units. The plane should have a scale of 1000 units on the XYZ axis. We will also be giving it the following material name.

There are three aspects to this material name

Once that is done go ahead and give the water plane four UV channels. The purpose of each UV channel are as follows:

This ends everything we need to create in our structure ASS file. We can export our current scene and move on the the structure-design ASS file in the physical section.

Now lets handle our water regions properly. We will start by creating another plane in our example level to represent the water in our game world. Give it a Z height of -400 units and set the scale to 1000 units on the XYZ axis. Go into edit mode and extrude the object down around -100 units so that it will reach the bottom of our example level. Make sure that the normals are facing outside/away from the center of our object. We will also be giving it the following object name.

There are two aspects to this material name

Now that we've created a water region lets add another object to define the direction objects will flow in. You can skip this step if you do not want there to be direction in a body of water you make. Add an Arrows object found under the Empty list in the Add menu. Set the scale on this object to 600.0 units on the XYZ axis. We will also be giving it the following object name.

Now we can export these assets to an ASS file. The ass file we create from the meshes we created must go in a different subdirectory from the assets created in the Visuals section. The structure-design command will also be used instead of the standard structure command to compile our ASS file.

Once the ASS file is compiled, the water_physics00 can be referenced in the map's sky_atm_parameters tag under the Underwater Settings block to change the Murkiness and Fog Color. This is the color the player sees beneath the surface of the water. Additionally, the sky_atm_parameters tag is referenced in the scenario tag under the Screen Effect References block in the atmospheric slot.

Design surfaces are special surfaces that can be used to keep players in a set play space. These barriers do not affect AI and do not need to follow the sealed world rules. They can also be enabled or disabled with the script function soft_ceiling_enable.

There are three different types of surfaces.

The following HS commands can be used to debug these.

Objects that are set as soft ceilings will produce invisible barriers that prevent users from walking past the facing normal. If a user somehow ends up on the other side of one then walking near one will allow the user back into the play space. The format for these are as follows:

Objects that are set as soft kill will produce invisible regions that kill the user once they enter it for longer than a second. The format for these are as follows:

Objects that are set as slip surface will produce surfaces that cause players to slide back. This will prevent users from walking past the map boundary without making it too obvious that there is an invisible wall. The facing angle for faces marked as slip surfaces should be greater than 35 degrees. Tool will throw out an error otherwise and the surface will be disabled. The format for these are as follows:

Seams connect BSPs together. Surfaces that are set as a seam surface will connect to another seam surface if the two surfaces are identical (including triangulation) and occupy the same space. The easiest way to do this in Blender is to use the magnetic snapping tool set to edge mode and sliding the surfaces together on an axis. A seam can only connect two BSPs.

A seam can be made by creating a material called +seam:example_seams_1

Once we have multiple bsps that seamed together properly, you can use Tool's structure command to import the individual .ASS files for each bsp.

Once all the .ASS files are imported, you can run structure-seams levels\multi\example_seams to create the example_seams.structure_seams file that will later be referenced in the scenario tag.

After the example_seams.structure_seams file is created, you might be asked to reimport the .ASS files. This varies depending on what bsps have seams. Reimport those bsps and continue.

Now the example_seams.structure_seams file can be referenced in the scenario under the Structure Bsps block.

Now that seams have been added to the scenario, you must create zone sets. Zone sets specify which bsps will be loaded as a player progresses and can be triggered through scripting and trigger volumes. For example, if the player starts in zone_set_a that has bsp_j and bsp_k loaded, and the player progresses to zone_set_b that has bsp_k and bsp_l loaded, zone_set_a will switch to zone_set_b. There are also zone sets that have all bsps marked to be loaded at once for debugging purposes.

Create a zone set called all and check all the bsp zone flags. Save your scenario and open it up in Sapien.

In Sapien, zone sets can be switched by pressing Ctrl+B or going to Edit > Switch Zone Set...

Thanks to the following individuals for their research or contributions to this topic: